Shanghai is a land of top restaurants. To name a few, there’s ultraviolet, Mr and Mrs. Bund, elefante, South beauty, lost heaven, and many more. We are not intending to recommend any high end restaurants. Rather, our purpose this trip is to try some awesome possum street food/ snacks.

While walking along the streets of Shanghai and passing some gardens on the way, everywhere smelled of osmanthus amidst the smog. According to the locals. It’s the season of osmanthus in autumn, how nice. This is how the osmanthus tree or Shrub looks like.

I was quite fond of the Shanghai first food hall on the Nanjing Pedastrian street. They have all sorts of Chinese sweets and some imported food. On the 2nd level, they sold various types of seasoned, preserved and pickled food stuff, like Chinese ham, waxed meats, cooked food and savory snacks. They actually sold this particular cucumber like item which is marinated with shrimp sauce and is very salty. This was available in Singapore long time ago and I’ve been searching for the longest time every time I went to Hong Kong, Malaysia, Taiwan or China. Alas I found it here! A huge handful for about RMB 7. Feel like I can eat for a lifetime as only a little is needed each time.

I think you’d agree that they actually look really unappealing and somewhat similar to worms but they are one of the best condiments for porridge! I do not know what they are called, but the nice lady at the counter allowed me to try to confirm the taste.

Another item available at Shanghai first was hairy crab which is in season. They all look plump and delicious don’t they?

As osmanthus is all around, how can there not be snacks made with it? We passed a cart selling steamed osmanthus cake. It’s basically osmanthus flower and molasses/ brown sugar sandwiched between rice flour. I was impressed at how they made these little desserts. With a big board and a mold with many small square holes, 24 will be ready in no time. 6 pieces for RMB 10 seemed quite reasonable. Eat them immediately else they turn hard and I did not fancy them after. I also could not taste the osmanthus but maybe there are better ones elsewhere. 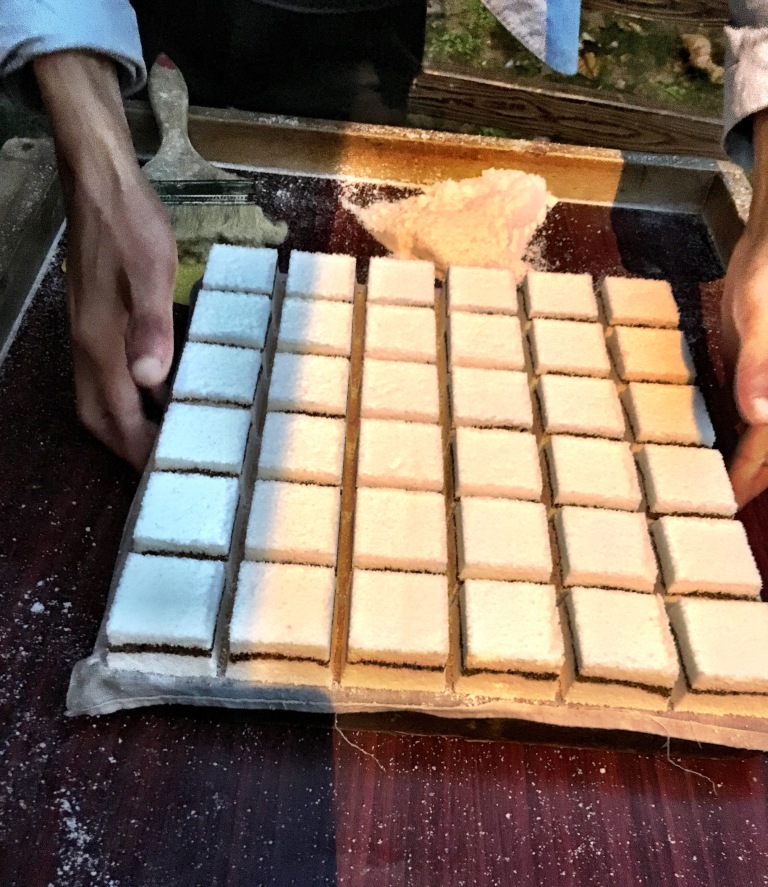 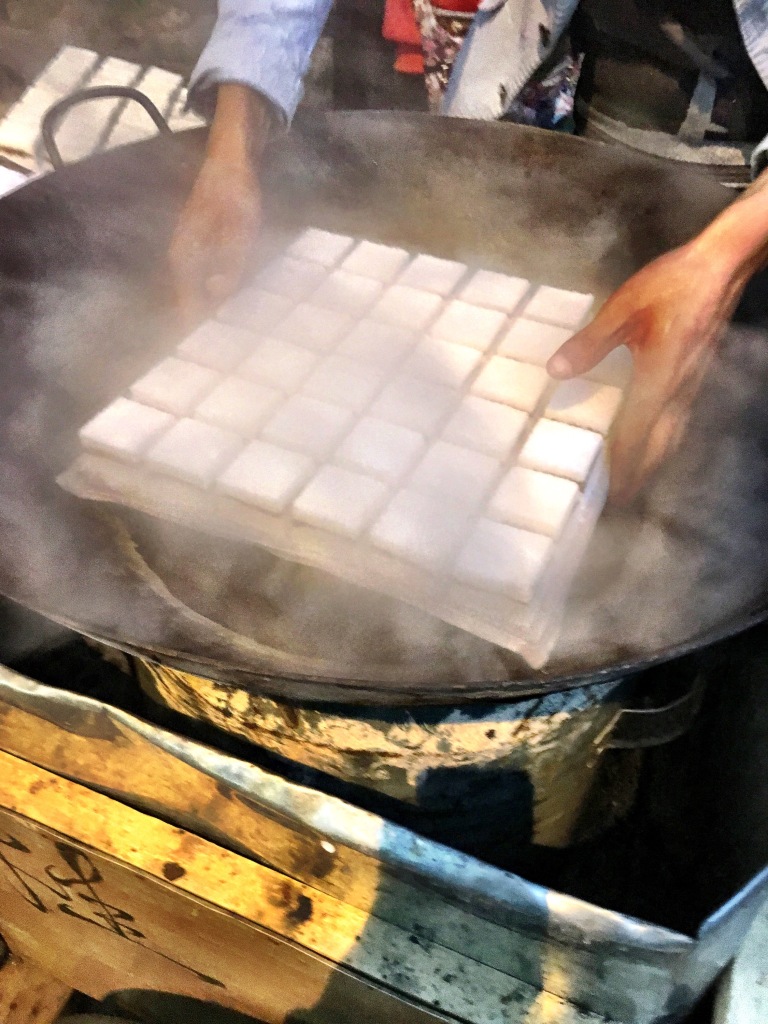 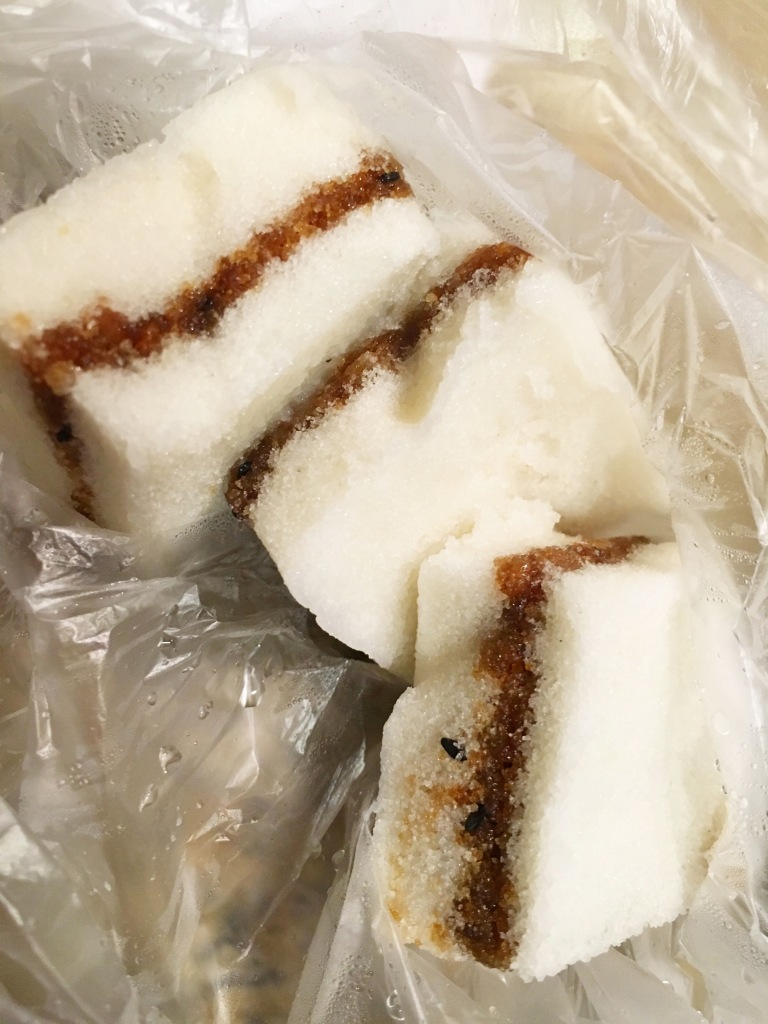 This next snack is the real deal, best Xiao long baos (dragon dumpling or steamed dumplings) I’ve ever tasted, no others even the super famous chained brand (DTF) can beat this. Jia family soup dumpling (佳家汤包) is a no frills little shop which does not have many items on their menu, either that or I arrived late. Anyway, I tried their duck blood soup, seaweed soup and pork/ crabmeat dumplings… Oolala the dumplings were so full of soup, very tasty and fragrant. The soups were also pretty good, light and refreshing. The branch i went to was off Nanjing West road. 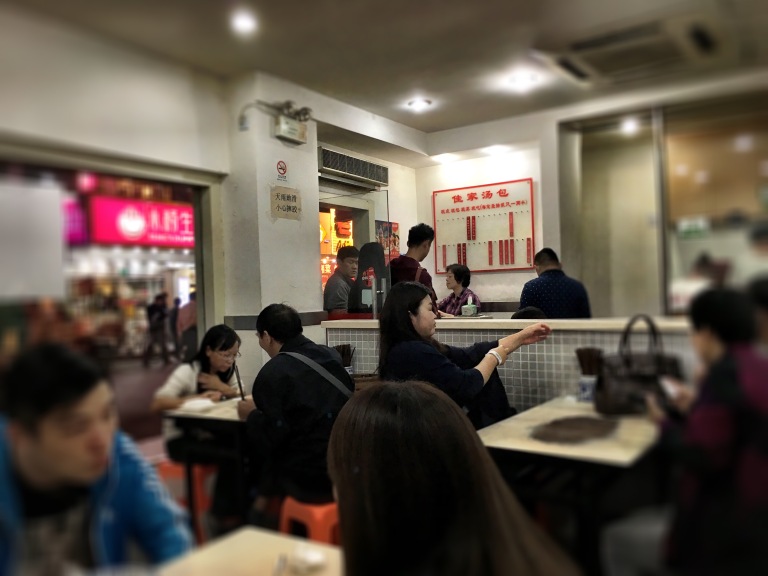 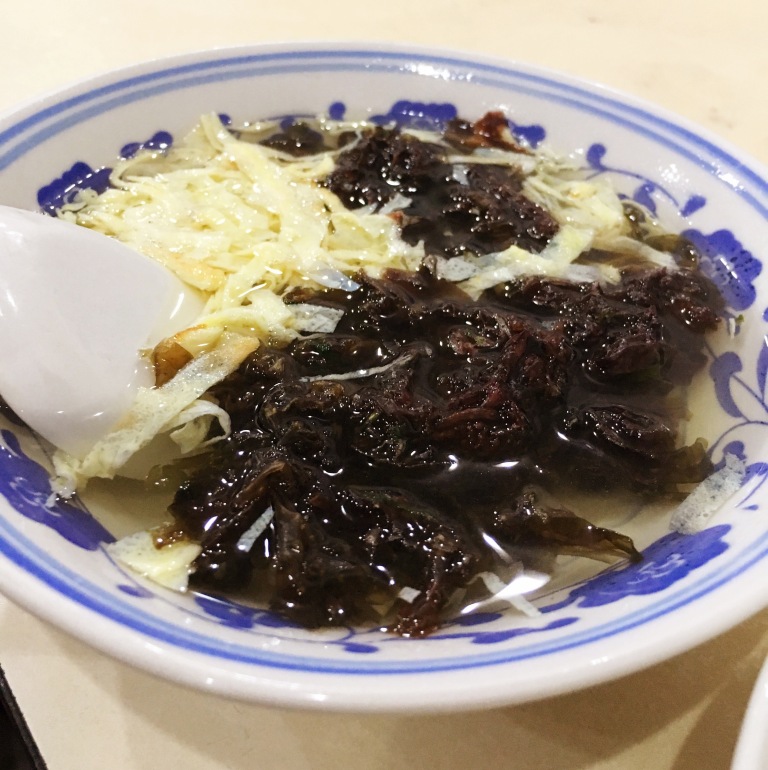 The next item is also filled with soup and its pan fried and steamed. They are also called fried buns or dumplings (生煎包). At Yang’s dumplings (小杨生煎）just opposite Jia family dumplings serves one of the most delicious buns. They were so full of soup, and so hot, diners be careful not to be scalded. I liked it that they do not stinge on ingredients. The buns were flavorful yet just the right taste. Each one so huge and each one cost RMB 2, unbelievable but true!

We also found the nicest star fruit plus Asian or nashi pear juice. No ice, pure juice at RMB 21 for a big cup filled to the brim.

There were also many cafes but this one we went in apparently had traditional old school type of cakes. I got two but they were just quite average.

And, I fell in love with this fruit. It’s called winter dates. Im sure everyone knows the dried  red dates for making soups but this should be the fresh version. They are crunchy like apples.

For those who like mochi and chewy foods, this following item is a must try – glutinous rice roll. This stall is located near Xintiandi off huaihai road. Glutinous rice forms the outer layer while it wraps snow vegetables (a type of preserved food), pork floss and you tiao. RMB 4 each is a steal and very popular amongst the locals. 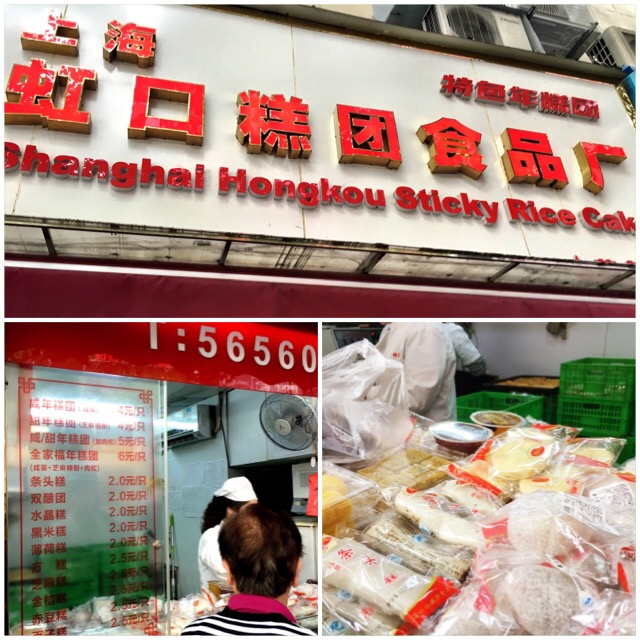 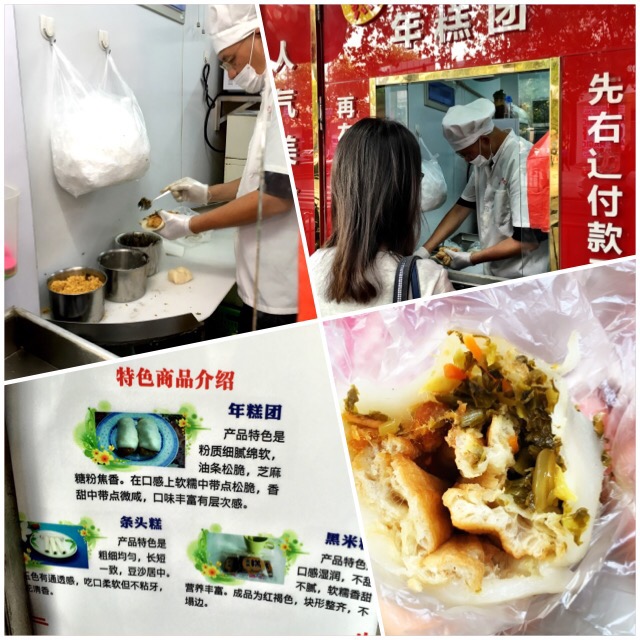 Along huaihai road, there were a few shops selling lotsa snacks and cooked food, they all looked delectable but do not allow trying. 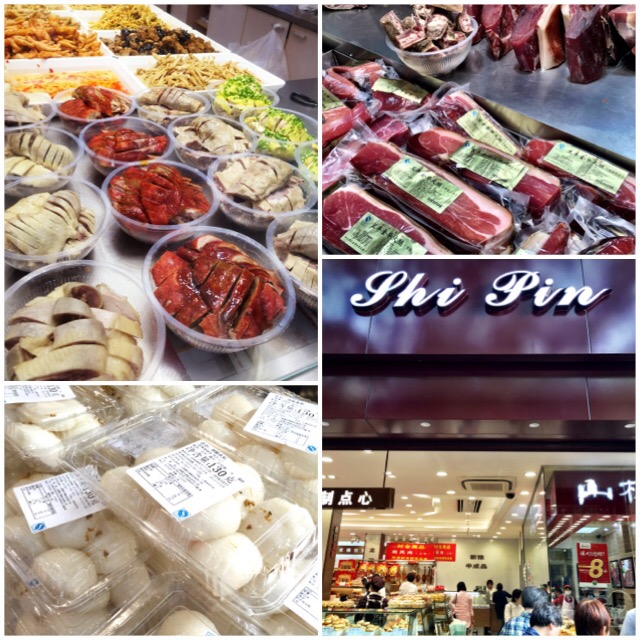 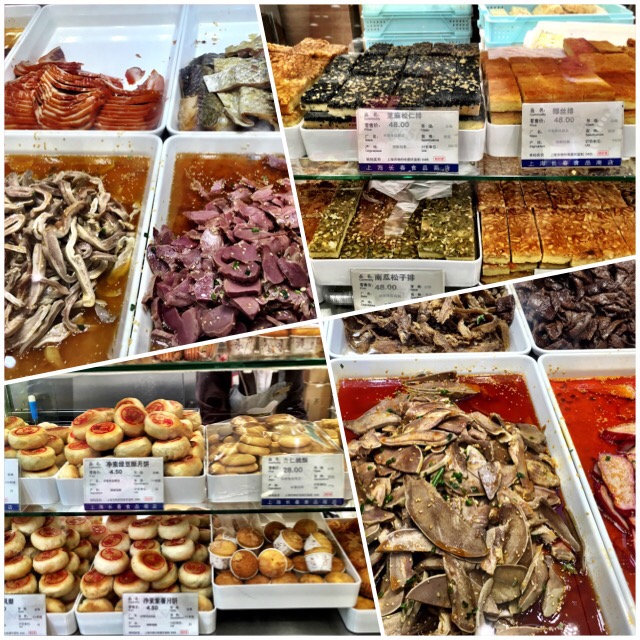 Then this other shop Guangming village on huaihai road is another must try. Queues form any day and time. During mid autumn festival, the locals queue for hours. Their flaky skin meat moon cake (RMB 4) is delicious! And they do not taste weird. Imagine the filling of steamed pao in a flaky skin pastry…. Oh the thought of it makes me hungry. For those who prefer vegetarian there’s also another flavor with nuts and citrus peels (RMB 2). It’s also good but a little too sweet for my liking. Note – these moon cakes are sold hot or warm, so they are extra delicious if eaten on the spot. 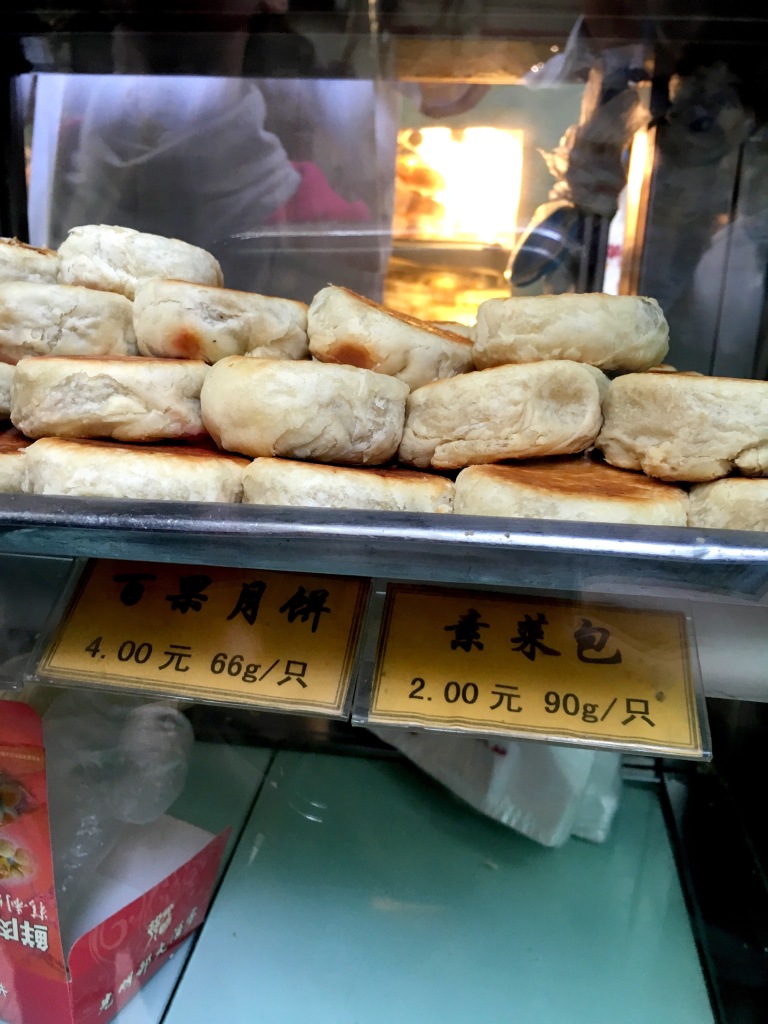 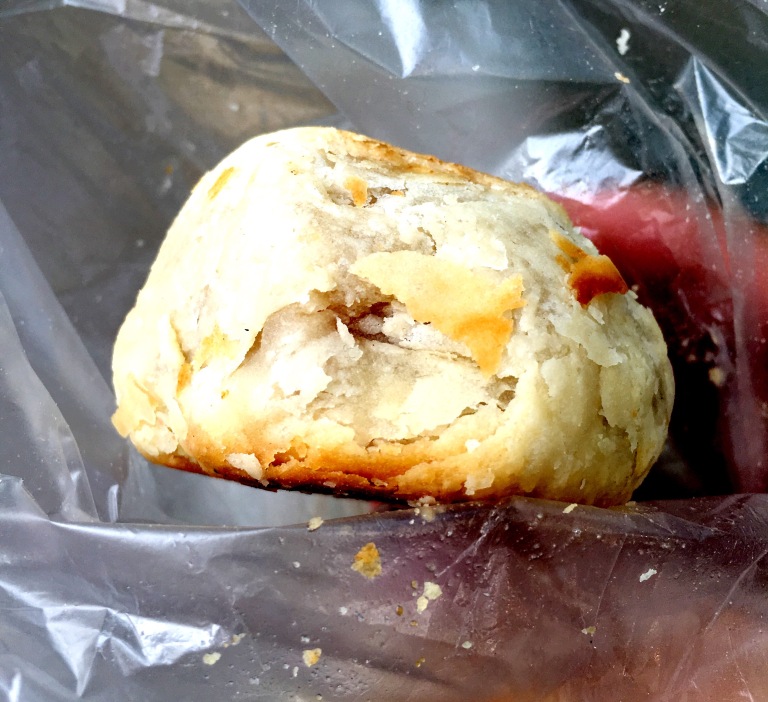 If you’re in Shanghai, try them and let me know how you liked them. If there are other snacks/ foods which are good and not on this post, please share them with us.