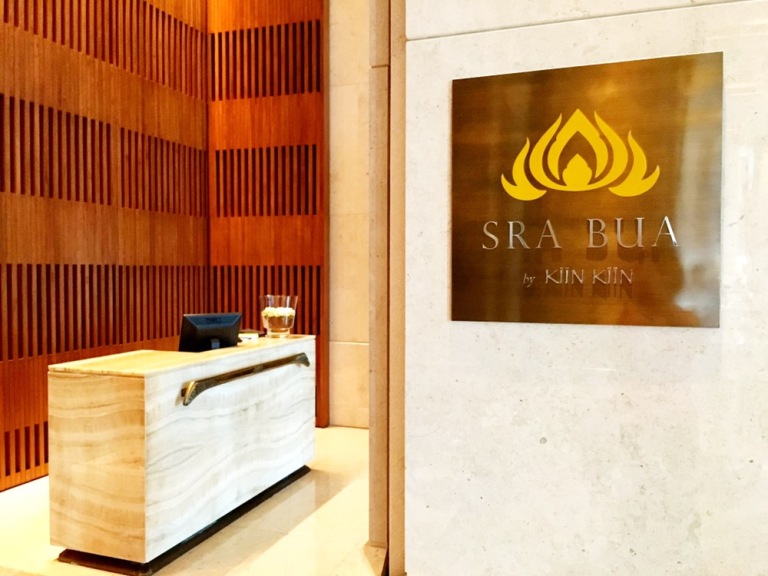 Calling all molecular food fans, this place is a must try. The experience we had at this restaurant led by Michelin-started chef Henrik Yde Andersen was indeed interesting. We were impressed by restaurant’s grandeur, the sequence and number of dishes served throughout our almost 3 hour dinner. 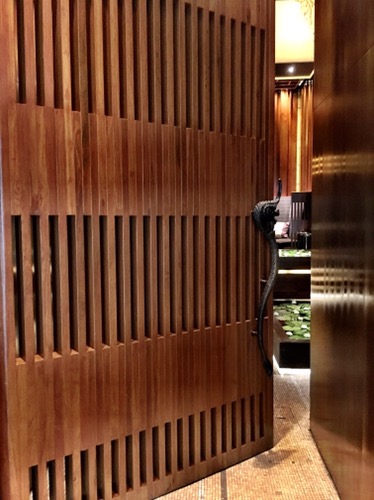 To start our journey, we were served several appetizers and by the time this round ended, we felt comfortable and were no longer hungry…

The lotus root slices were served in a beautiful wooden bowl accompanied with dried lotus pods… Very beautiful presentation unfortunately though the lotus slices were crispy and sweet, we could not taste the kaffir lime in the icing sugar 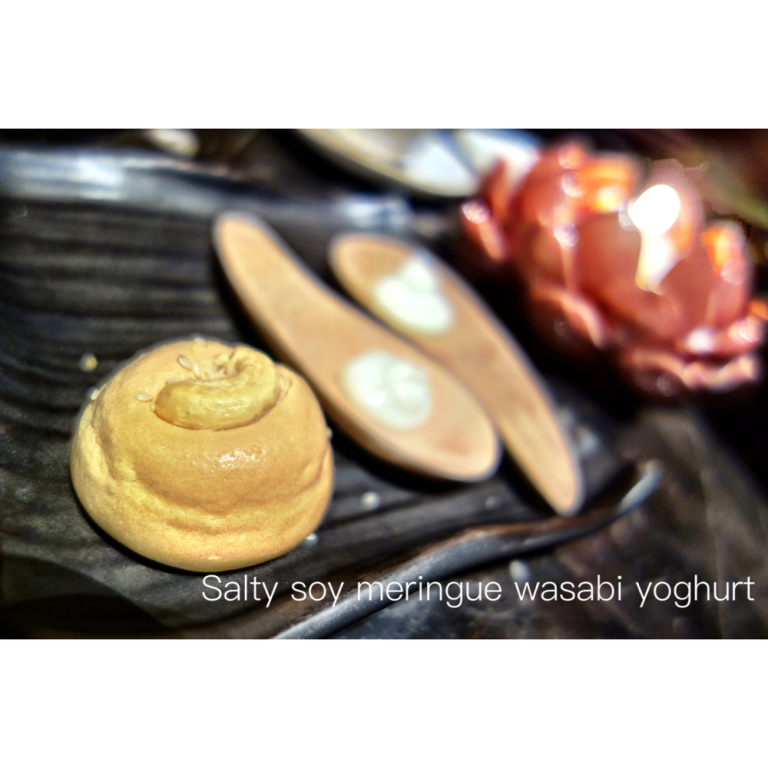 Surprise surprise.. salty meringues emerged from a bowl of white sesame seeds and served with wasabi yoghurt. This was one of our favorites.

‘Joke’ also known as porridge was served in shot glasses nestled in a log amongst wheatgrass. Nice presentation but this rice congee in chicken stock, ginger, garlic, shallot was quite a disappointment as it was rather plain.

Erm, would you believe that this was actually chicken satay?! The base was chicken skin and the dome was green apple and frozen peanut sauce. Strange looking and tasting satay but innovative nonetheless. 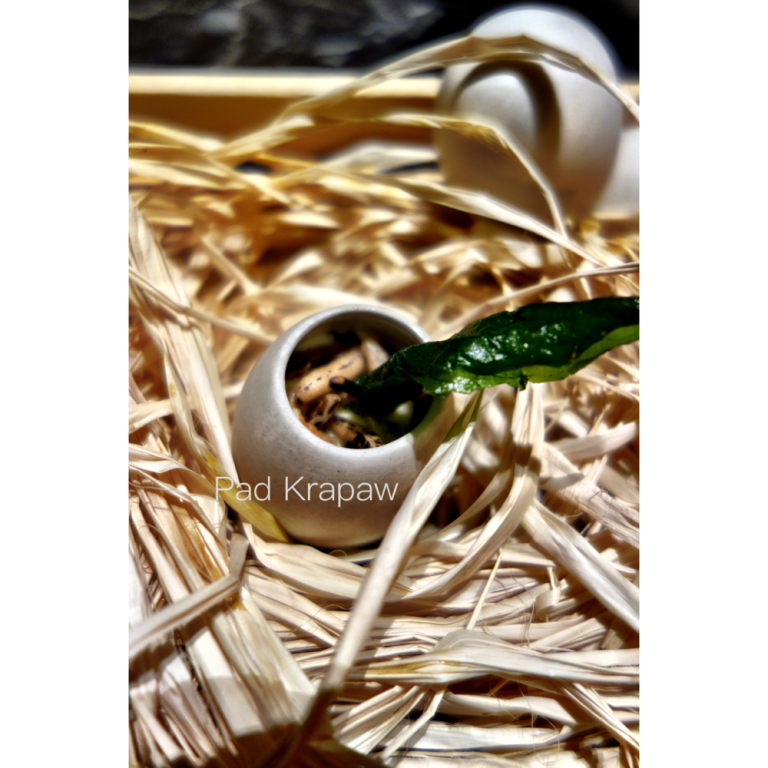 The cutest pad krapow served in an egg on hay.. looked like there was a worm in it. 100 points for presentation! 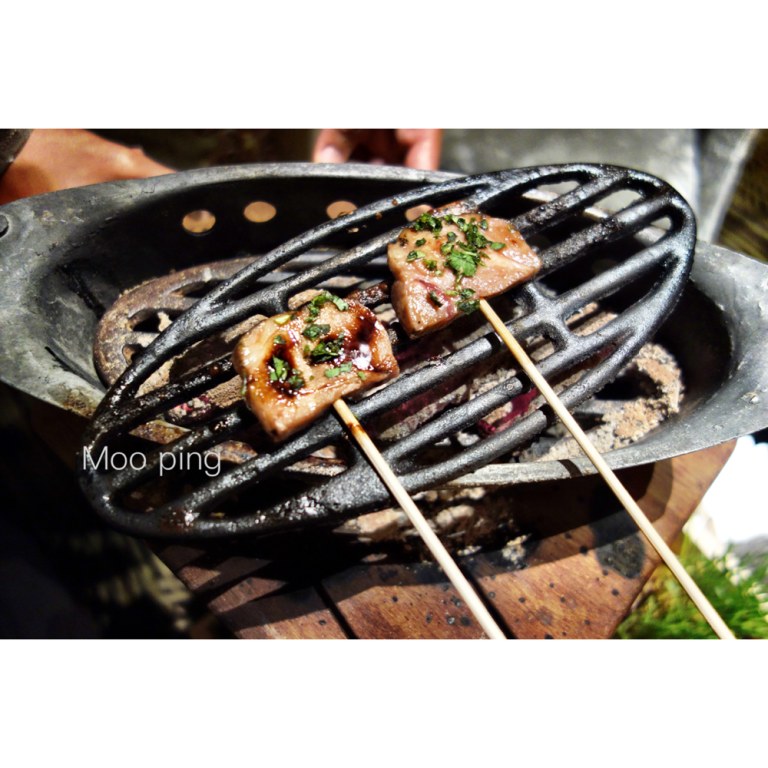 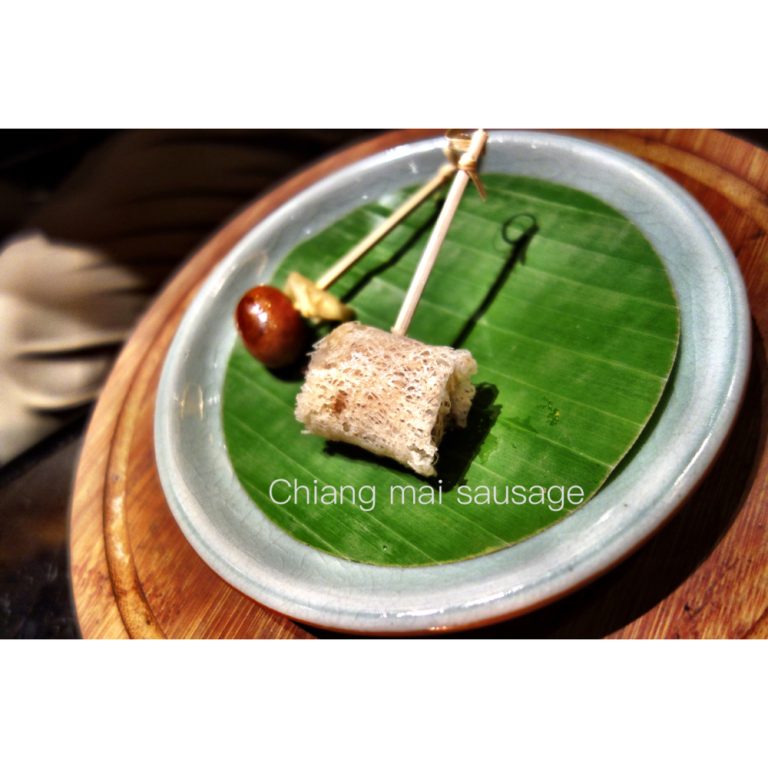 This dish was served smoked and the photo was taken when the lid was opened.

A very delicious egg flan, miso soup, bonito flakes, roasted garlic. To me, it’s like a high class chawanmushi which is delicately prepared. I could not taste any garlic though, which I thought was a good thing as the dish maintain its balance without any flavors overpowering another.

Another of our favorites, and so beautifully presented in a floating flower. The scallop was nestled in the middle. Fresh scallop with the subtle fragrance of coconut and lemongrass… Such nice pairing.

Now the 11 course starts with a few rounds of starters…

Course 3 – salad with cucumber & laab duck. Complex ingredients of egg white, peanut, mint leaves, coriander, mince duck breast, Thai muesli to sprinkle on dish, and cotton candy which dissolves when the dressing is added. Refreshing and tangy, this dish prepared us for more dishes to come. Doesn’t it look like meringue?? 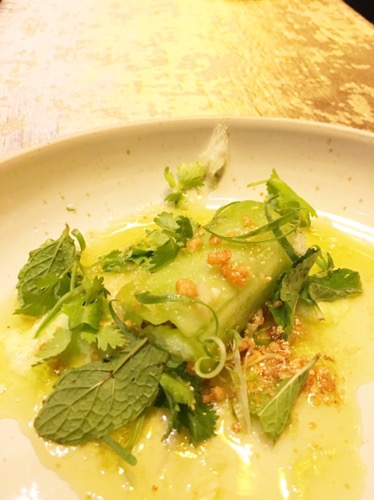 Course 4 – postcard from Japan salmon scallop & soy. The worst tasting dish from the menu and we could not comprehend how this is named a postcard from Japan… We were told to break the frozen soy sauce and we thought we’d be getting some fresh sashimi salmon and scallops but to our dismay, everything beneath was frozen! Presentation of the dish was also very plain.

Course 5 – tuna worm. Surprisingly,this simple raw tuna in sesame oil hidden in malt ‘soil’ atop wasabi mayo was heaps better tasting than the postcard. We had fun digging for our ‘worm’ with the tweezer and finished all our ‘soil’. 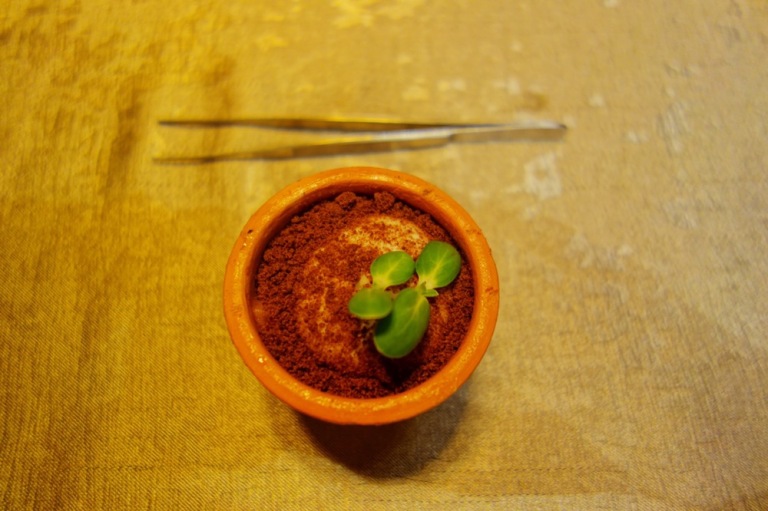 Course 6 – curry flan with frothy curry. Now there’s 2 different flans in this round. Red and green curry flans were served in different styles. Neither were spicy though we were told the red version was. We preferred the green curry version as it was more refreshing with a tinge of sourness (as we were quite stuffed when we got to this course). The artichoke and salted cod  were added to the green curry dish. The red curry had crab meat, winter asparagus, kaffir lime leaves but tasted a bit  sweet. 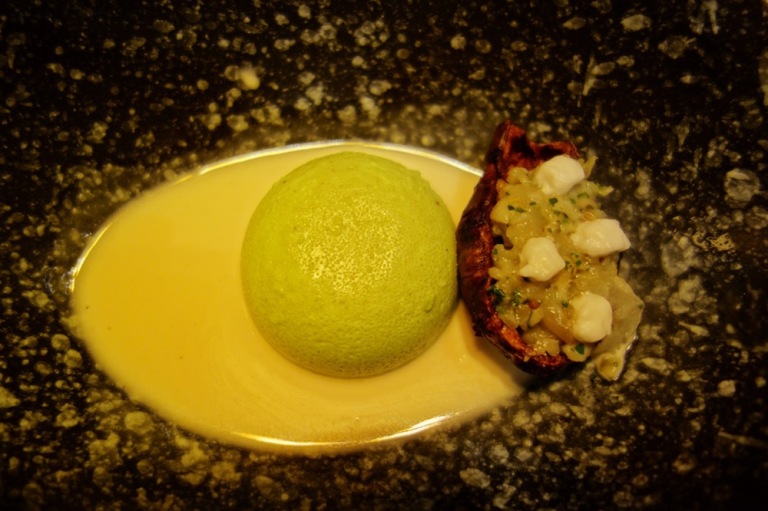 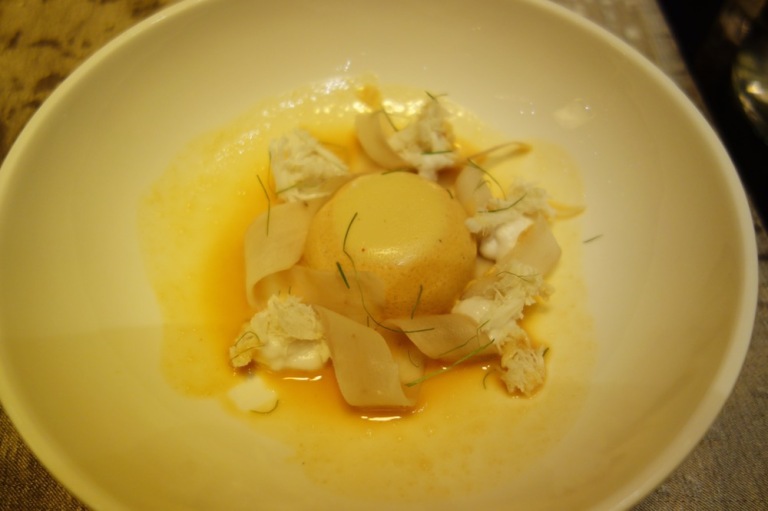 Course 7 – sweetbreads sweet & sour. Sweetbreads were not really our thing. And by the time this dish was served, we were so full but this was the last starter. There was an elaborate preparation before the dish was ready to be eaten. Liquid nitrogen, whipping siphon,  ice bucket to create the pineapple ginger foam jelly which I did not really fancy. The whitish mass I’d seen from the restaurant’s menu looked powdery something like mini ice cream balls or crushed frozen cream but it wasn’t … I ended up munching on the pumpkin, onion and beetroot chips with the appetizing tamarind sticky sauce. 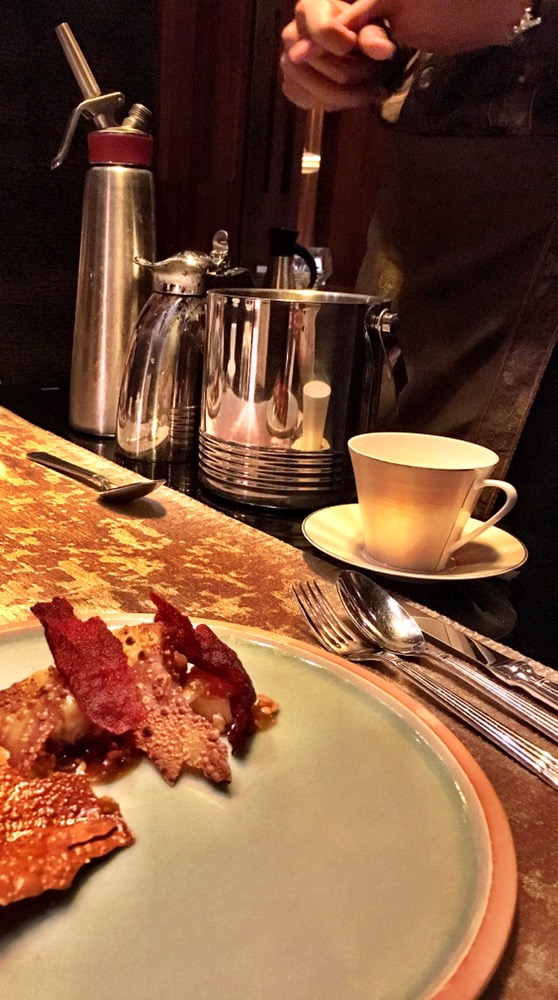 Course 8 – main course – beef rib with oyster sauce. The appetizers and 7 starters were enough to satisfy an average person…. But we had more to come… This course which was served in fresh pepper oyster sauce came with rice. We could not finish the dehydrated vegetables and did not touch the rice. The beef was average and the dehydrated veges would make a healthy snack.

Course 9 – tea & dim sum. Put simply, this was earl grey ice cream made into ‘Siew Mai’ served in a dim sum basket. Unfortunately we could not taste the earl grey but the ice cream was still nice. 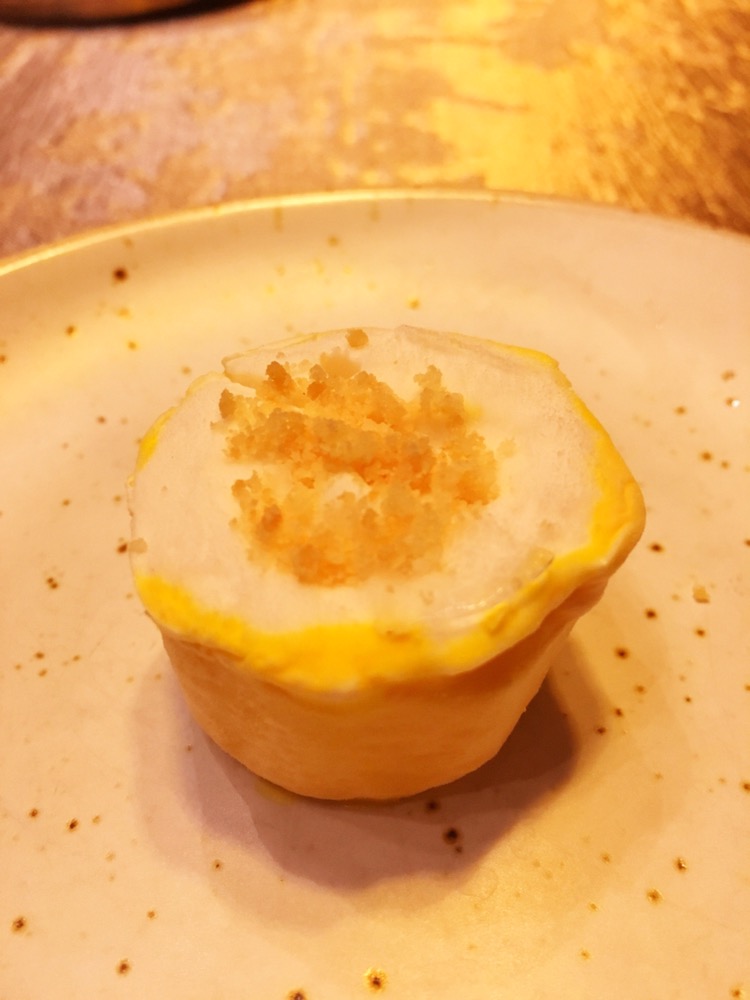 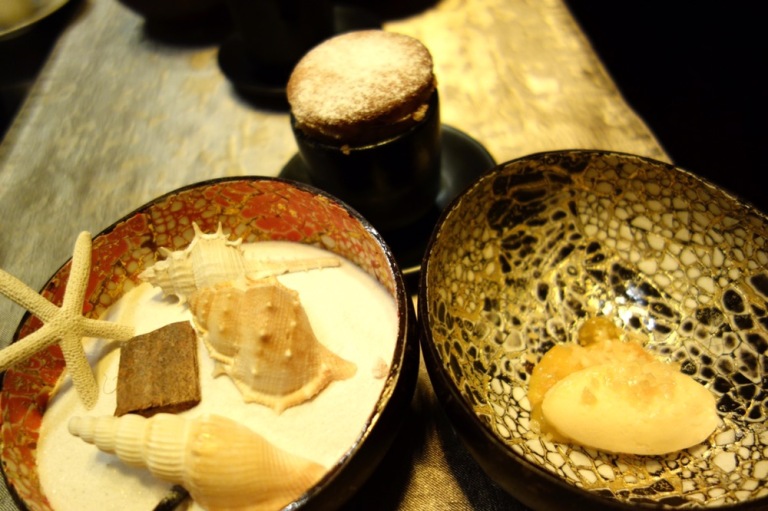 Course 11 – pandan noodles with coconut. Similar to chendol but much fancier. Hot coconut milk is poured on a thin slice of frozen coconut milk or white chocolate. While melting, the other ingredients appear… This version was interesting as there were mint leaves, pistachios and chervil to perk our tastebuds. 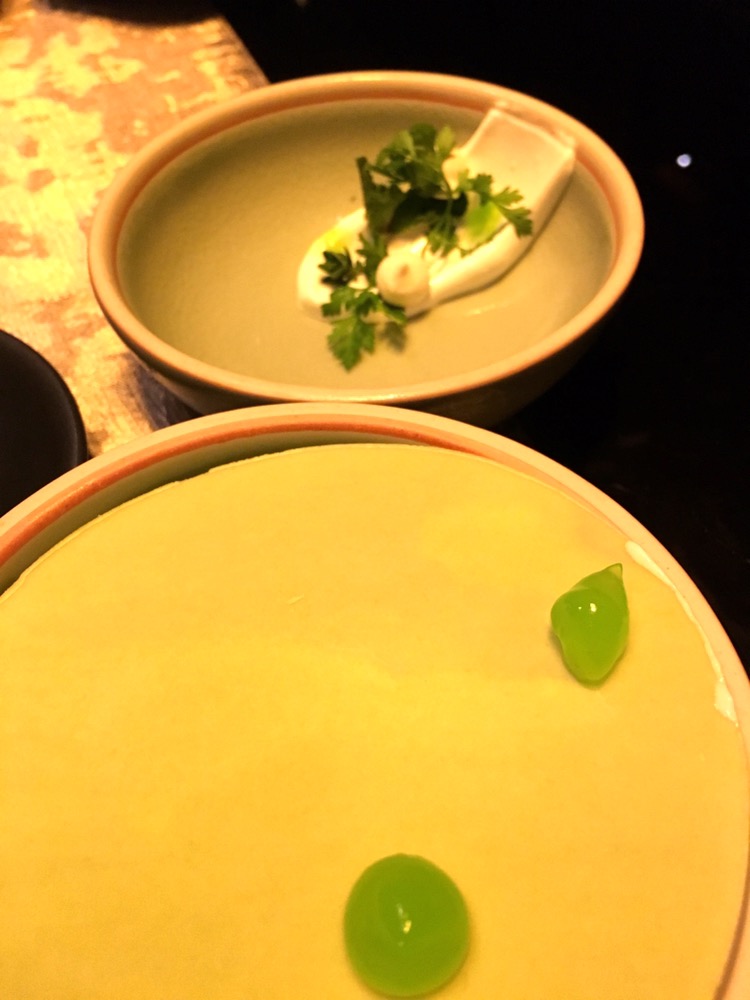 Last but not least, we could choose from a range of coffees and teas. We had a cafe latte and fruit tea with petit fours of macaron, Mars bar tasting ball and white chocolate item. The coffee and tea were good and the little sweets were delicious.

Overall, we really enjoyed the gastronomic experience and were impressed with how chef Henrik created the courses with innovation. Though we did not enjoy every dish, there were still some which stood out and others we did not mind having. Perhaps on our next visit, we may go with the ala carte or with empty stomachs!